The Bourier project is potentially a new lithium field in an established lithium district. It is owned by Critical Elements Corporation, which has entered into an agreement with Lomiko Metals whereby Lomiko may acquire up to 70% of the property by funding exploration activities and other consideration. Details of the Agreement are available here.

To see the latest updates related to the Bourier Project, click here.

The Bourier project consists of 203 claims for a total ground position of 10,252.20 hectares (102.52 km2) in a region of Quebec that boasts other lithium deposits and known lithium mineralization, as shown in the maps and table below. The lithium pegmatites tend to occur in swarms in the volcano-sedimentary units, and the Bourier property covers a large part of this regional volcano-sedimentary unit, which also hosts Nemaska Lithium’s Whabouchi deposit and Critical Elements’ Lemare showing.

Lomiko and Critical Elements Lithium Corporation mandated GoldSpot Discoveries Corp. in the summer of 2021 to conduct a remote targeting process for lithium, on the Bourier claims within the Nemiscau belt (see Figure 1 below). GoldSpot Discoveries Corp.’s proprietary approach of Artificial Intelligence (AI) and geological interpretation highlighted lithium potential at Bourier claims (see Figure 2 below) within the Nemiscau greenstone belt. This process has outlined a total of 15 high to moderate prospective lithium targets were identified.

GoldSpot generated lithium targets using a knowledge-based approach with Artificial Intelligence (AI) data-driven methods. The AI data analysis trains machine learning algorithms to predict the presence of lithium using all variables (features), both numeric and interpreted on a 10 x 10 m grid cell datacube. Once the model performs to a satisfactory level it is able to produce:

Prior to heading into the field to conduct surveys and test the algorithms GoldSpot prepared a map of probable outcrop zones, resulting from the AI analysis on high-resolution satellite imagery. The machine learning-assisted outcrop detection allows for time- and cost-efficient field exploration.

An exploration crew composed of Critical Elements’ and GoldSpot’s geoscientists conducted a 20-day prospecting program at the Bourier project, with focus on the high to moderate lithium targets generated by GoldSpot. The highlights of this program include the discovery of five new sectors of spodumene-rich (Li) pegmatite (laboratory analysis results are pending; Figure 2). These discoveries were made within, or the extension, of GoldSpot’s targets. 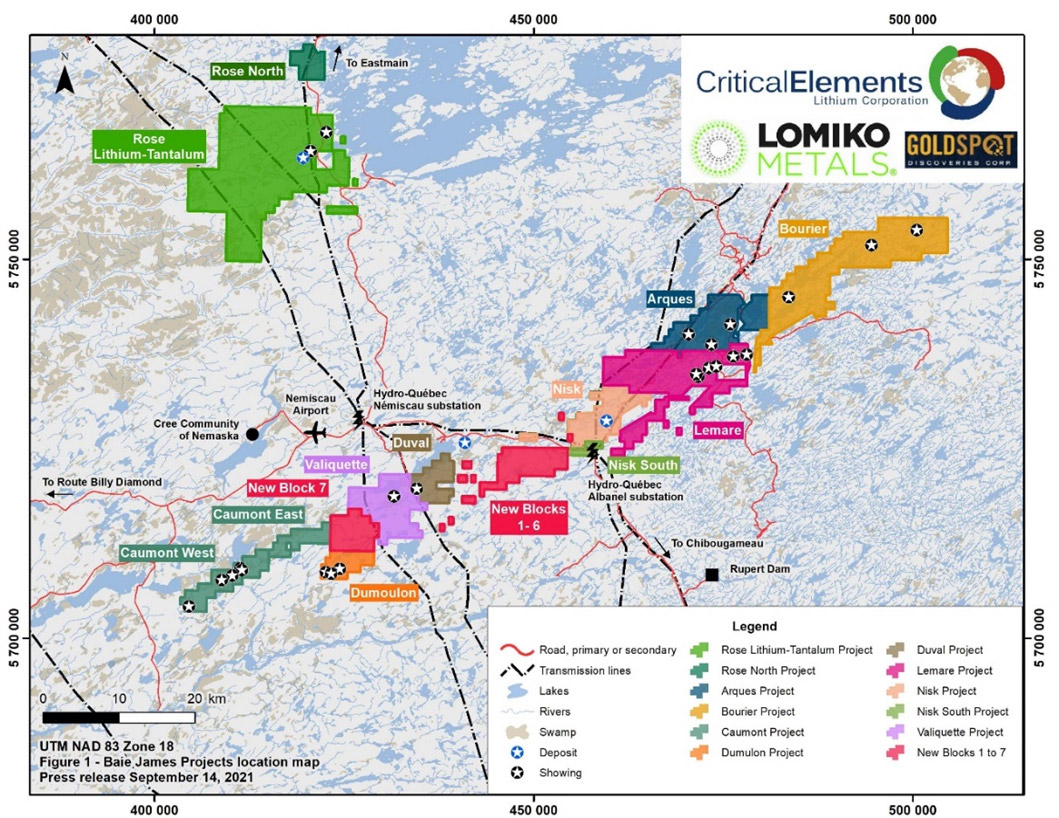 The main discovery, located about 11 km NE of the Bourier Lake, consists of muscovite and garnet pegmatites showing 1-5% of centimetric-size spodumene crystals (Figure 3), over an outcropping area of 40 x 30 m. Additional spodumene-rich pegmatites were sporadically found within a 1 km trend from the main discovery, highlighting the potential for wider mineralization system. Four other spodumene-rich pegmatites zones were found elsewhere on the property.

A total of 15 lithium exploration targets were identified (Figure 2), reducing the area of investigation to approximately 9.5% of the total claim holding. The newly interpreted pegmatite outcrops largely controlled the distribution of the lithium targets. 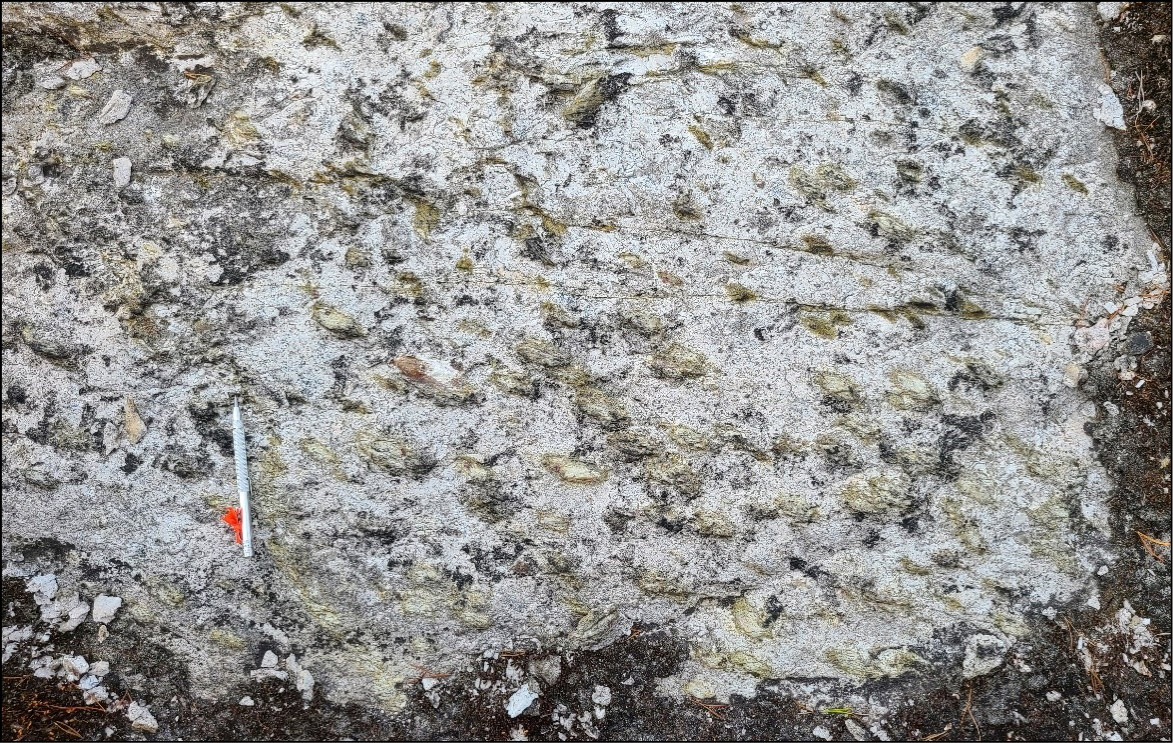 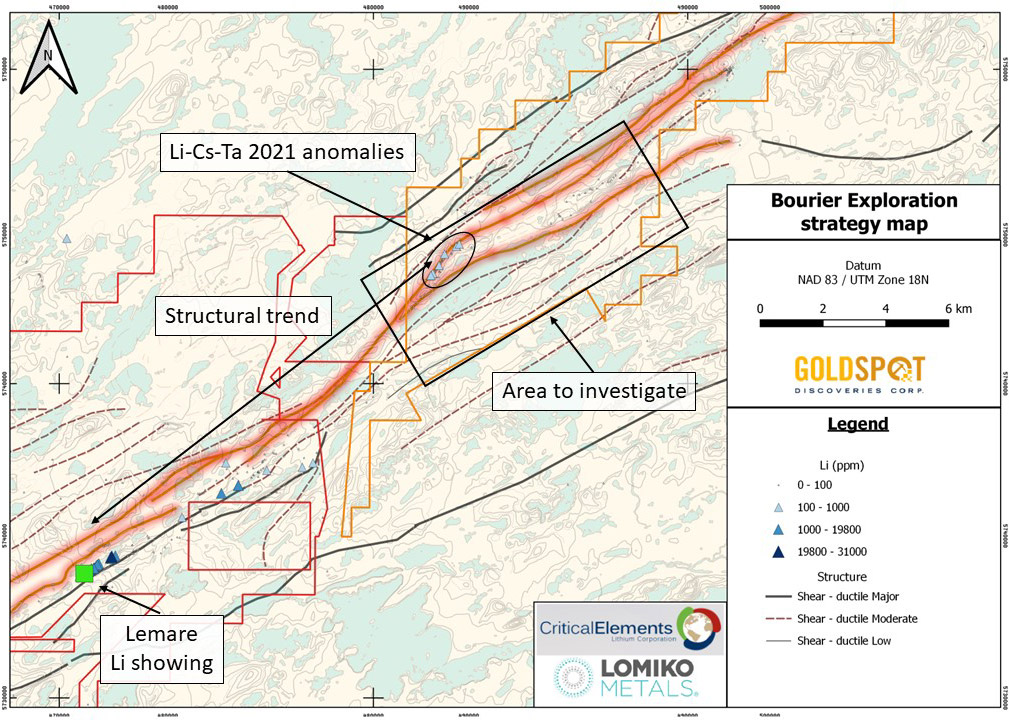 Critical Elements grants to Lomiko the exclusive right and option to acquire, on or before December 31, 2022, an initial 49% Earned Interest in the Bourier Property by issuing to Critical Elements an aggregate of 5,000,000 common shares of Lomiko, by making cash payment to Critical Elements totaling $50,000 and by incurring or funding Exploration Expenditures for a total amount of $1,300,000 on the Property, as follows:

Subject to Lomiko having exercised the First Option, Critical Elements will also grant to Lomiko the exclusive right and option to increase its undivided interest in and to the Bourier Property from 49% to 70% by making a cash payment to Critical Elements of $250,000, by issuing to Critical Elements an aggregate of 2,500,000 common shares of Lomiko, by incurring or funding additional Exploration Expenditures for an amount of $2,000,000 and by delivering a resource prepared in compliance with NI 43-101 standards on the Bourier Property prepared by a Qualified Person independent of Lomiko and Critical Elements, for a period commencing on the delivery of the First Option Exercise Notice and ending December 31, 2023, in summary as follows:

Following the exercise of the First Option by Lomiko, and in addition to the amounts paid, common shares issued and Exploration Expenditures incurred or funded by Lomiko under the First Option and thereafter under the Second Option, as applicable, Critical Elements shall receive a royalty equal to 2% net smelter returns resulting from the extraction and production of any Minerals on the Bourier Property. The Royalty includes the right of Lomiko to purchase a portion thereof (1%) by paying to Critical Elements a total cash amount of $2,000,000.