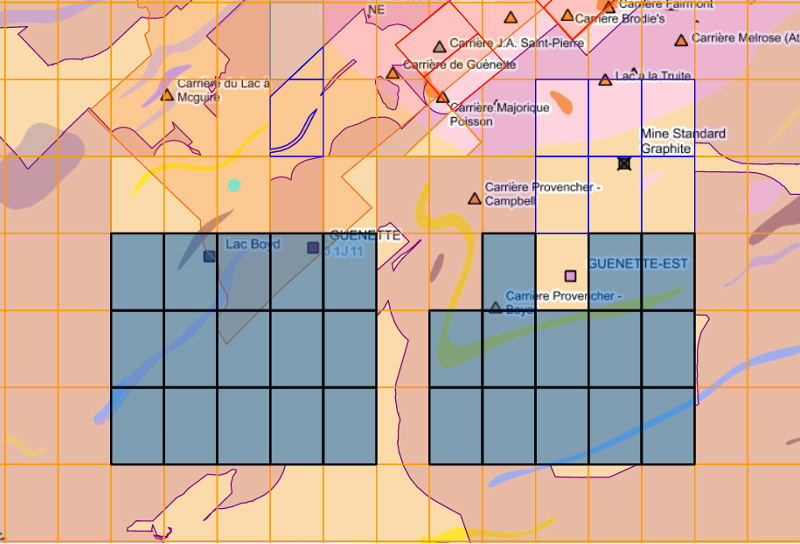 Discovery: Mineralized zone with outcrop discovered in 1933 by geological mapping.

History of work: In 1946, MRNQ – Regional geological cartography (RG 023, 1948).
lithology: The gneisses show small intercalations of quartzite and calcareous marble. They are pyritic and contain sillimanite as well as a significant amount of graphite. The gneiss is in contact to the north with amphibolites.

Morphology: The shape and dimensions of this mineralized zone are unknown.

Genesis: Graphite mineralization formed like several others in this sector by the deposition of organic matter inside sediments, followed by metasomatism or substitution of this matter by carbon, during the paroxysm of the Grenvillian orogeny.

Discovery: Mineralized zone discovered in 1922. Work history: In 1922-1923, Standard Graphite. – Trenches excavation. In 1924-1935, Canadian Graphite. – Acquisition and operation until 1930 and intermittently until 1935. In 1954, Thero Metals – Flotation tests and attempt to resume operations but without success.

Production reserve: Date of production: 1922 -1930; production from 1923 to 1935, 2,370,100 pounds (1185 short tons). The mine was closed, not because of the exhaustion of the deposit, but because of the drop in the price of graphite. The exploitation consisted of a certain number of surface trenches, spaced over a distance of 152 m in a NE direction and a large semi-subterranean excavation, leading to a shaft whose bottom is 40 m away and from which side galleries with a total length of 67 m. Holder: D. Matte (1987).

Lithology: The dominant rock of the deposit is a banded biotite paragneiss, very pyrite-infused in places and crossed by veins of fine-grained gray granite, a few feet thick, and also by tourmaline pegmatite dykes. At the entrance to the large underground excavation, there is also the presence of feldspathic quartzite, in clear layers.

Morphology: The main ore zone is 2.4m wide at surface and has been exposed and mined over a strike length of approximately 30m. Presence of feldspathic quartzite, in clear bands, oriented NW 80/32 degrees.

Comment – typology: Genesis: Mineralization of graphite, formed like several others in this sector, by the deposition of organic matter inside sediments, followed by metasomatism or substitution of this matter by carbon, during paroxysm of the Grenvillian orogeny.

Mineralization: Grade: ± 9.02 to 22.40% graphite in the best areas (selected samples). The banded gneisses are irregularly impregnated with graphite, but in places contain a very high proportion.