April 27th, 2021 – Montréal, Québec – Critical Elements Lithium Corporation (TSX-V: CRE) (US OTCQX: CRECF) (FSE: F12) (“Critical Elements” or the “Company“) and Lomiko Metals Inc. (“Lomiko”) (TSX-V: LMR) (OTC: LMRMF)(FSE: DH8C) are pleased to announce that Critical Elements and Lomiko have entered into an option agreement (“Agreement”) that gives Lomiko the right to acquire up to a 70% interest in the Bourier project.

“Recent consumer interest in electric vehicles has increased investor interest in Lithium and Graphite, two of the major components of a lithium-ion battery”, stated A. Paul Gill, Lomiko’s Chief Executive Officer.           “Quebec is in a unique position of having ample supply of both commodities and now Lomiko has opportunities in additional battery materials.”

“This option agreement with Lomiko will allow the Bourier property to be explored in detail for battery minerals discoveries, such as Lithium, Nickel, Copper and Zinc.  Critical Elements is currently focused on the development of its Rose Lithium-Tantalum project.  With Lomiko as a joint venture partner in the Bourier project, shareholders of both companies will be able to benefit from successful exploration of a highly prospective project,” stated Jean-Sébastien Lavallée, Critical Elements’ Chief Executive Officer.

The Bourier project consists of 203 claims for a total ground position of 10,252.20 hectares (102.52 km2) in a region of Quebec that boasts other lithium deposits and known lithium mineralization, as shown in the maps and table below.  The Bourier project is potentially a new lithium field in an established lithium district.

Figure 1. Location of known lithium deposits and showing and Bourier (in gold) Showing in the James Bay area of Quebec. 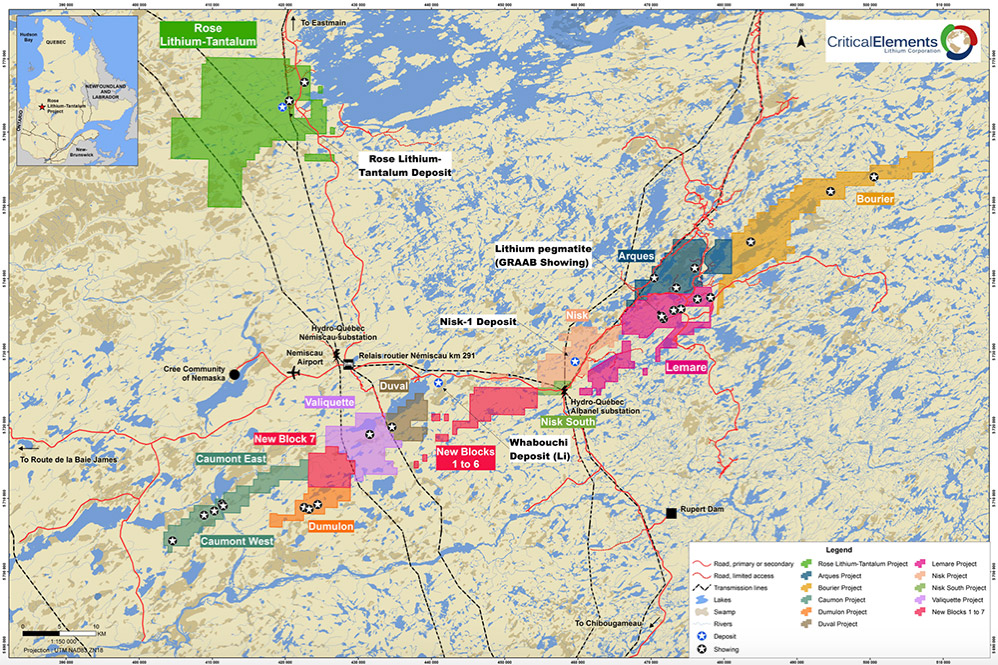 Under the Agreement, Lomiko will earn its interest in Bourier project by way of a joint venture arrangement.  The key terms of the Agreement are detailed in the below:

Critical Elements grants to Lomiko the exclusive right and option to acquire, on or before December 31, 2022, an initial 49% Earned Interest in the Bourier Property by issuing to Critical Elements an aggregate of 5,000,000 common shares of Lomiko, by making a cash payments to Critical Elements totalling $50,000 and by incurring or funding Exploration Expenditures for a total amount of $1,300,000 on the Property, in detail as follows:

Subject to Lomiko having exercised the First Option, Critical Elements will also grant to Lomiko the exclusive right and option to increase its undivided interest in and to the Bourier Property from 49% to 70% by making a cash payment to Critical Elements of $250,000, by issuing to Critical Elements an aggregate of 2,500,000 common shares of Lomiko, by incurring or funding additional Exploration Expenditures for an amount of $2,000,000 and by delivering a resource prepared in compliance with NI 43-101 standards on the Bourier Property prepared by a Qualified Person independent of Lomiko and Critical Elements, for a period commencing on the delivery of the First Option Exercise Notice and ending December 31, 2023, in summary as follows:

Following the exercise of the First Option by Lomiko, and in addition to the amounts paid, common shares issued and Exploration Expenditures incurred or funded by Lomiko under the First Option and thereafter under the Second Option, as applicable, Critical Elements shall receive a royalty equal to 2% net smelter returns resulting from the extraction and production of any Minerals on the Bourier Property.

The Royalty including the right of Lomiko to purchase a portion thereof (1%) by paying to Critical Elements a total cash amount of $2,000,000.

During the agreement, Critical Elements shall act as the operator and as such, shall be responsible for carrying out and administering the Exploration Expenditures on the Property, in accordance with a work program approved by the Parties regarding the Property.

In the event of a Lithium discovery, Critical Elements will retain Lithium Marketing Rights meaning the exclusive right of Critical Elements to market and act as selling agent for any and all Lithium products, including Lithium ore, concentrate and chemical, resulting from the extraction and production activities on the Bourier Property, including transformation into chemical products.

A NI 43-101 compliant Technical Report has been performed by InnovExplo in 2012 on the Bourier Property for Monarques Resources Inc.

The area is characterized by metasedimentary rocks, mainly biotite paragneiss containing minerals typical of regional amphibolite metamorphic facies, and amphibole–plagioclase gneisses (amphibolites) of olcanic origin (Valiquette,1975). The northern boundary of the property is marked by intrusive pink granite. The metasedimentary rocks in the centre of the property are intruded by mafic and ultramafic rocks, granites, pegmatites, and late diabase dykes, the youngest rocks of the area. The amphibolites contain numerous lenses of ultramafic tremolite schist that follow the foliation of these amphibolites.

The biotite paragneiss crops out mainly in the low-lying ground. The paragneiss incorporates sills of mafic rock (amphibolites) and ultramafic rocks, metavolcanic layers, granite stocks and dykes, and pegmatite masses. These rocks dip on average 35° to the southwest (Valiquette 1975). The ultramafic rock in outcrop is mainly serpentinite, although narrow sills of ultramafic amphibole rocks are also present. These rocks may be crosscut by pegmatite dykes. Several granite intrusions cut the metasedimentary rocks. In some areas the granite intrudes the biotite gneisses. This granite is usually massive with very weak gneissic texture. The pegmatite dykes or sills cross-cut all the other rocks with the exception of the diabase. The pegmatites occur as two (2) sorts: pink, associated with oligoclase gneisses and granite, and white, associated with metasedimentary rocks. White pegmatites are generally fine to coarse grained containing muscovite, almandine garnet, black tourmaline (schorl), magnetite and biotite. Muscovite grains can be up to a few centimetres in size. The pink pegmatite ranges from fine to a very coarse grained variety comprising very large microcline crystals reaching up to 30 cm long. Besides quartz, microcline and plagioclase, the pegmatites also contain magnetite as large crystals up to 15 cm in length. Accessory minerals are apatite and garnet with trace amounts of spodumene.

Outside of work program complete between 2010 and 2012 for Zinc-Copper and Gold by Monarques Resources Inc., there has been very limited lithium exploration undertaken at Bourier Property.  Based on other lithium deposits around the world, it is a common occurrence for pegmatites to exist in “swarms”.

The Bourier property is adjacent and North-East to the Lemare Lithium property, wholly owned by Critical Elements.

Initial exploration at Lemare was undertaken in 2012 by Monarques Resources Inc. who discovered a “granite pegmatite dyke containing a considerable amount of spodumene”.  The pegmatite ranges in apparent thickness from 4.8 to 14.2 metres and was followed for close to 200 metres in length on surface.

Between 2016 and 2018, Lepidico Ltd. carried out two drilling programs on the Lemare Lithum project within the scope of an option agreement that expired on July 27, 2018.

This transaction is subject to the approval of the TSX Venture Exchange.

Paul Bonneville, Eng., is the qualified person that has reviewed and approved the technical contents of this news release on behalf of the Corporation.

Critical Elements Lithium Corporation aspires to become a large, responsible supplier of lithium to the flourishing electric vehicle and energy storage system industries. To this end, Critical Elements Lithium is advancing the wholly owned, high purity Rose lithium project in Quebec. Rose is our first lithium project to be advanced within a highly prospective land portfolio of over 700 square kilometers. In 2017, the Corporation completed a robust feasibility study on Rose Phase 1 for the production of high quality spodumene concentrate. The internal rate of return for the Project is estimated at 34.9% after tax, with a net present value estimated at C$726 million at an 8% discount rate. Capital and operating cost parameters were confirmed in 2019 by Primero Group in the context of a Guaranteed Maximum Price under an Early Contractor Involvement agreement, as a prelude to an Engineering, Procurement and Construction process. Detailed engineering for Phase I is expected to conclude this year as we also deliver technical studies for Phase II, the conversion of spodumene concentrate to high quality lithium hydroxide. In our view, Quebec is strategically well-positioned for US and EU markets and boasts exceptional infrastructure including a low-cost, low-carbon power grid featuring 93% hydroelectricity. We have a strong, formalized relationship with the Cree Nation.