(Montreal, Quebec) April 7, 2021 – Lomiko Metals Inc. (TSX-V: LMR, OTC: LMRMF, FSE: DH8C) (Lomiko or the “Company”) is pleased to provide an update on its La Loutre graphite project (“La Loutre”), located in Quebec, Canada.  La Loutre comprises the Graphene-Battery (GB) zone and the  Electric Vehicle (EV) Zone.  The names of the zones are not reflective of the products each will produce but generally indicate applications of products. The recent testwork program confirmed that each zone will produce similar products.

“These very encouraging results of initial testing suggest that La Loutre graphite may be suitable for high-end industrial use.”, stated A. Paul Gill, CEO, “Our next step is to complete a Preliminary Economic Assessment.”

In January 2021, a metallurgical process development program was initiated at SGS Minerals in Lakefield, Ontario.  The objective of the program was to develop the flowsheet and conditions suitable to upgrade La Loutre mineralization to at least 95% total carbon.

Metallurgical development work was carried out on two composites representing the two zones.  The process development program produced a flowsheet and conditions that generated concentrates of over 97% total carbon for both mineralized zones. The equipment and reagents selected for the process are well established in the mineral processing field and are consistent with other graphite projects. The flowsheet, which is depicted in Figure 1, comprises rougher/scavenger flotation stage, followed by a primary and secondary cleaning circuit. 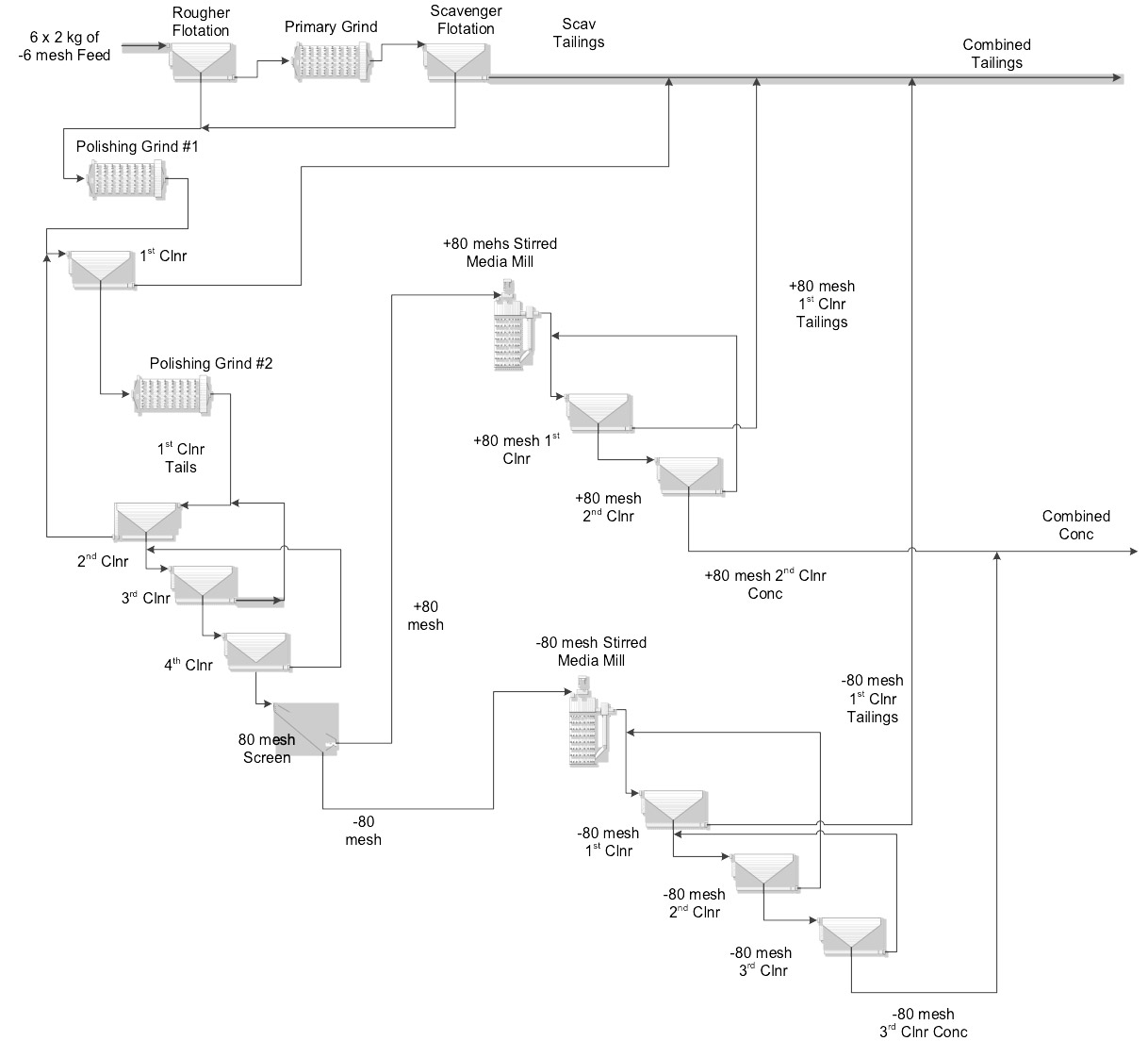 The GB composite produced a final concentrate with a significantly higher mass recovery into the +80 mesh size fraction of approximately 50% compared to 25-30% for the EV composite. However, both composites responded equally well to the same flowsheet and conditions, producing combined concentrate grades that are consistently at least 97% C(t).

The program culminated in a locked cycle test (LCT) using a 50:50 blend of the two mineralized zones.  The overall mass balance is presented in Table 1. The mill feed grading 7.60% carbon was upgraded to a combined concentrate grading 98.5% carbon at an overall graphite recovery of 93.5%.

The final concentrates of the three cycles that were used to develop the overall mass balance were submitted for a size fraction analysis (SFA), and the average results of the three SFAs are presented in Table 2. The combined concentrate grade of 97.8% total carbon is slightly lower compared to the direct concentrate analysis of the LCT mass balance, which is related to measurement uncertainties associated with assay methods.

One of the primary applications for the -100 mesh size fraction is the value-add process to produce spherical graphite for batteries. The ability to upgrade the fines size fraction to almost 98% total carbon by flotation only might have a positive impact on downstream purification costs since concentrations of impurities are often proportional to purification cost. 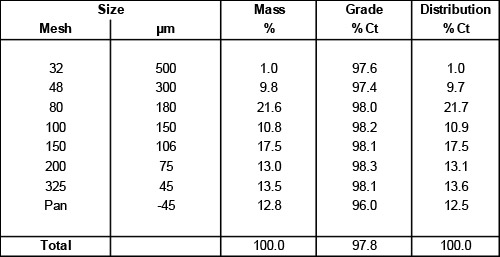 Preliminary comminution tests produced Bond ball mill work indices of 6.9 kWh/t for the EV zone and 11.2 kWh/t for the GB zone, which places La Loutre mineralization into the very soft to soft category, which is favourable for minimizing grinding energy costs.

Variability flotation testing on four composites that made up the two development composites will be performed to complete the scoping level metallurgical study.

The current process development program will be completed within the next couple of weeks, and the company commenced work on a preliminary economic assessment (PEA) study.

During the next phase of metallurgical testing, conditions of the existing flowsheet will be optimized to minimize flake degradation and maximize graphite recovery. Further, the optimization will evaluate potential capital and operating cost savings.

The robustness of the optimized flowsheet and conditions will be verified with a larger number of variability samples, and a more comprehensive comminution program will be completed.

Mr. Oliver Peters, a Principal Metallurgist with Metpro Management Inc., is a Qualified Person within the meaning of NI 43-101. Mr. Peters is satisfied that the analytical and testing procedures used are standard industry operating procedures and methodologies, and he has reviewed, approved and verified the technical information disclosed in this news release, including sampling, analytical and test data underlying the technical information.

In 2020, The Quebec Government released the Quebec Plan for Development of Critical and Strategic Minerals (“The Quebec Plan”) which indicates graphite demand would likely increase 300-500% in the coming decades as more is used in the production of spherical graphite for anode portion of Electric Vehicle Lithium-ion batteries.  Quebec has an opportunity to play a vital role in reducing carbon emissions and become a key provider of critical battery materials to the North American economy.

For more information on Lomiko Metals, review the website at www.lomiko.com, contact A. Paul Gill at 604-729-5312 or email: info@lomiko.com.

On Behalf of the Board,